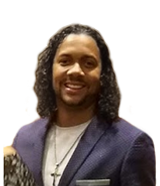 Steve Iyoha chess learned from his father around the age of 3 and soon became a successful junior player. Over the next 13 years he won various schools & local events. He also had the honor of representing his State in a national tournament playing first board.

After giving up competitive chess for his college years, Steve has finally returned back to his favorite hubby and started coaching chess.

Aside from chess, Steve has diverse interests and loves spending time with his family. He is also an experienced Soccer coach and believes that children should be positive and strive to reach their full potential!