Nakamura Still Too Strong For MVL In Speed Chess 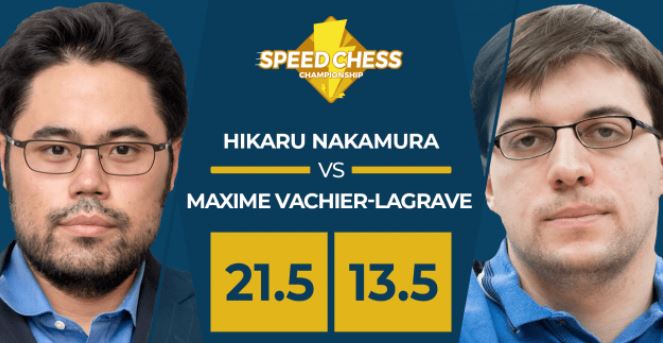 Over the board the players consider themselves equals, but online Hikaru Nakamura is still too strong for Maxime Vachier-Lagrave. The American GM won yesterday’s Speed Chess match with an eight-point margin.

It was the last quarterfinal of this year’s Speed Chess championship, but wouldn’t have looked bad as a final. The fight was between the world number two (Vachier-Lagrave) vs the world number three (Nakamura) on the current FIDE blitz ratings list.

Online speed chess is a different ballgame though, especially taking into account that the Chess.com matches also include bullet games. Nakamura was still the pre-match favorite, also because he had beaten MVL in two previous matches on Chess.com: their 2015 Death Match (17.5-10.5) and their 2016 Blitz Battle (21.5-10.5). In fact, Nakamura hadn’t lost a single segment there.